The Best Sustainable Fish to Eat in the Summer

The Best Sustainable Fish to Eat in the Summer

Coming soon.The Best Sustainable Fish to Eat in the Summer 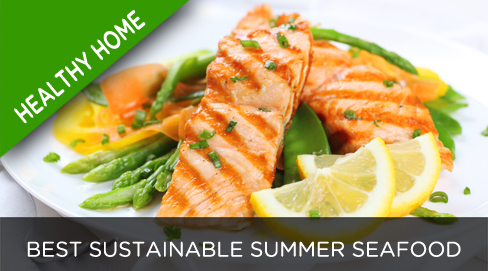 We don’t typically think of seafood as seasonal. If you go to the supermarket, many types of fish are available year-round. But not all seafood is created equal. If you care about fresh seafood, sustainable fisheries and protecting our oceans – and eating fish that is healthier for you and your family -- it pays to know what fish are in season.

Best Fish to Eat in Summer

Why should you care?

Much of the ï¬sh available today in the United States is imported, and frequently from places where health and environmental standards are weak or non-existent. Regulation of the fishing industry worldwide is poorly enforced, and less than 2 percent of seafood imports to the U.S. are inspected for contamination.[1]

Shipping fish around the world has a negative impact on the climate, but it can have an even greater impact on our oceans. With nearly 85% of the world’s fisheries overfished, our seafood choices are more important than ever.[2] Decades of overfishing have driven many fish populations to levels so low that recovery is a long-term proposition.

Aquaculture, the farming of fish and seafood, has resulted in a far-reaching variety of environmental consequences, including the escape of farmed fish from their containment that threatens native wild fish populations; the spread of deadly diseases and parasites; and the pollution of our oceans from the inputs and outputs of fish farming.  Though presented by the industry as a “solution” to over-fishing, the overwhelming evidence is that aquaculture is not relieving any pressures on wild fisheries.[3]

Studies have also found farmed fish to be less healthful than their wild counterparts. Industrial aquaculture raises significant human health and food safety concerns. Fish farms frequently use antibiotics to control disease in their crowded pens, and PCBs accumulate in farmed fish at a higher rate than wild fish. PCBs can cause significant health concerns for both humans and the environment, and are associated with increased the risk of cancer, disrupting the endocrine system, and contributing to developmental and reproductive problems.[4] The best way to avoid antibiotics and PCBs in your seafood is to choose wild fish over farmed.

While wild fish are more sustainable than farmed fish, farmed shellfish can be sustainable on a small scale. Mussels, oysters and clams are filter feeders, which means that they clean water and can help improve local environments. Just remember to ask about harvest methods and local contaminant warnings.

I buy organic fruits and vegetables. Is organic salmon better?

There are no legal organic standards for seafood in the U.S., so ï¬sh labeled “organic” are always imported and are farmed, not wild-caught,[5] and do not necessary adhere to U.S. standards for organic.

Another health concern in fish is mercury -- mercury pollution is produced by coal-fired power plants and other industrial processes, is found in oceans and contaminates fish. The best way to reduce exposure to mercury is to reduce your consumption of predatory or long-lived fish, such as swordfish and tuna, Chilean sea bass and grouper.[6]

No GE fish are currently on the market, but at least 35 species of fish are currently being genetically engineered around the world, including trout, catfish, tilapia, striped bass, flounder, and many species of salmon. The only GE fish known to be proposed for commercial approval in the U.S. is the AquAdvantage® GE Atlantic Salmon, which is currently under review for commercial approval by the U.S. Food and Drug Administration.

Genetically engineered fish pose irreparable risks to wild populations of fish and our marine environment. Research published in the Proceedings of the National Academy of Sciences notes that a release of just sixty GE fish into a wild population of 60,000 would lead to the extinction of the wild population in less than 40 fish generations.[7] GE salmon also poses health risks to consumers. Some research has suggested that transgenic fish, including that presented by the FDA for the approval of the AquAdvantage salmon, may be susceptible to more diseases than fish currently grown in aquaculture facilities.[8]  Consequently, the amount of antibiotics given to transgenic fish may be even higher than the amount currently given to farmed fish.

For a list of companies who have stated that they will not carry GE salmon if they are approved, check out our Guide to Avoiding GE Fish.

Can I join a Community Supported Fishery?

Community supported fisheries (CSFs), which follow the same model as community supported agriculture in providing local seafood directly to consumers, are an excellent option if you live in a coastal state. CSFs significantly shorten the distance seafood travels to be sold, encourage fishers to use less destructive fishing methods, and distribute highly abundant stocks and bycatch that are discarded by industrialized fisheries.[9] They create a market for locally plentiful seafood that would otherwise be ignored. Eating a variety of seafood types also reduces exposure to contaminants and lowers pressure on over-popular choices.

Want to get Healthy Home tips in your inbox? Sign up for our monthly newsletter!